To learn about the hexagonal architecture, which is a good way to structure an application, and how to shield your domain model from external apis and systems.

This is not a basic exercise. I suppose you are already familiar with TDD and refactoring. You will need a computer with Java ≥ 1.5 and a Java IDE (I assume you will use Eclipse).

Problem: write a program that

The flat file is a sequence of records, separated by newlines; this are the first few lines:

with the first name of the employee substituted for “John”

The program should be invoked by a main program like this one:

Note that the collaborators of the birthdayService objects are injected in it. Ideally domain code should never use the new operator. The new operator is called from outside the domain code, to set up an aggregate of objects that collaborate together.

A test is not a unit test if:

Integration tests have their place; but they should be clearly marked as such, so that we can execute them separately. The reason we draw this sharp distinction is that unit tests should be

One way to make code more testable is to use Dependency Injection. This means that an object should never instantiate its collaborator by calling the new operator. It should be passed its collaborators instead. When we work this way we separate classes in two kinds.

The traditional way to structure an application in layers is

The meaning of a layer diagram is that

The traditional three-layers architecture has many drawbacks.

The hexagonal architecture avoids these problems by treating all external systems as equally external. The system is not seen as a pipe with user interface as one end, and the database at the other. We model the system as a kernel of application code, surrounded by ports and adapters to the external systems. 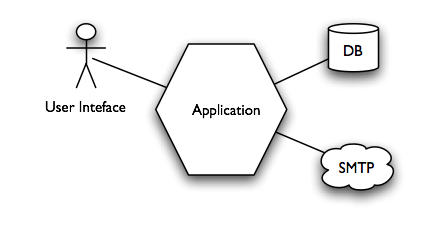 Every external systems is hidden behind a facade that:

The way to implement the hexagonal architecture is to abstract external systems and APIs with a Facade. A facade is a simplified view of the external system. For instance, there are a million of things that I could do with SQL and JDBC and my relational database. But my application only needs to do a few, specific things with the DB; for instance, retrieve all the employees that match some criterion. In that case, I can write a simple interface that exposes just that operation:

Note that the interface is written in terms of domain objects: the Employee object belongs to the domain. A case could be made that the specification for the date (month, day) should also be a domain object; I leave that to you, the reader.

So that was the facade part. The domain logic will only deal with the facade, and can be tested thoroughly using stubbed and mocked versions of that interface. But what about the real implementation?

The code that talks with the real database (or flat file, in our case) implements the facade and correspond to the adapter pattern. The adapter can be unit tested as well, by mocking the external APIs, but this is usually not worth the effort. Mocking the JDBC APIs is in most cases very complicated. It’s perhaps more effective to just test it on a copy of the real database, or maybe with an in-memory version of the real database. There are no hard-and-fast rules here; there is a mixed bag of tricks. One thing most proponents of mock objects agree on is that you should only mock your own interfaces (see section 4.1 of Mock Roles, Not Objects).

The idea for the exercise of sending email I got from someone I overheard at an XP Day; I think it was Willem van den Ende but I’m not sure.

Thanks to the Orione team for beta-testing and commenting on this kata, in particular Marco Gulino and Roberto Albertini who performed it more than once.

The standard layered architecture is described in Patterns of Enterprise Application Architecture by Martin Fowler, and in Domain Driven Design by Eric Evans.

The Hexagonal architecture is due to Alistair Cockburn. Here is a video of Alistair explaining it.

My collection of resources on the Hexagonal Architecture

Thanks to Jacopo for pointing out that this comment of mine was wrong.

Test Driven by Lasse Koskela contains plenty of tricks about how to do integration tests in Java.

How to convert a String to an InputStream:

This work is licensed under a Creative Commons Attribution-Share Alike 2.5 Italy License.

This entry was posted on 13 January 2009 at 17:13 and is filed under Agile. You can follow any responses to this entry through the RSS 2.0 feed. You can leave a response, or trackback from your own site.

12 Responses to “The birthday greetings kata”